Seaports as Catalyst for Environmental Sustainability: Emergence of Greener Seaports

Today, June 5, 2020, is World Environment Day, a day on which we raise awareness, promote and inspire positive change towards the environment. World Environment Day is the most renowned day for environmental action, and it has been celebrated every year on June 5th since 1974. This year’s theme ‘biodiversity’ is rather fitting, keeping in mind that the bush fires in Brazil, the United States and Australia; as well as the locust infestations across East Africa. Additionally, the global COVID-19 pandemic, underscore the fact that when we fail to protect our biodiversity, we destroy the system that protects human life. In an effort to preserve biodiversity and our environment, businesses are called upon to develop greener models, in which ports have a vital role.

Climate change is a reality, and it is causing glaciers to melt, sea levels to rise, massive forest fires and affecting all forms of wildlife (land and marine). On the World Environment Day, let us look at how Seaports are contributing to the problem and what steps, if any, they have taken to remedy the situation. Before starting with the assessment of how seaports contribute to greenhouse gas emissions, we should look at the scale and function of seaports in international trade. Maritime transport is essential to the world’s economy as roughly 80-90% of the world’s trade is fulfilled via sea trade routes. This is primarily due to the cost-effective nature of moving large volumes of goods and materials. As such, seaports are considered to be areas of key economic activity in the coastal regions. Maritime transport emits around 940 million tonnes (Mt) of CO2 annually and is responsible for about 2.5% of global greenhouse gas emissions. These emissions are projected to increase significantly, under a business-as-usual scenario, between 50% and 250% by 2050.

The European Union’s (EU) Shipping Climate Record reported by the International Council on Clean Transportation (ICCT) researched the maritime CO2 emissions and real-world ship efficiency performance of EU Member States. This report shows that there are significant performance gaps between ship design standards and real-world operations. For example, the theoretical design efficiency of a container ship may estimate 16.31 Mt of CO2 emissions, whereas in practice, the ship reported 19.92 Mt of CO2 emissions. Due to this performance gap, half of the EU’s cargo shipping emitted about 22 Mt more CO2 than it would have emitted if the ships operated according to their design standard. Additionally, the report found that the CO2 emitted by shipping from and to the several EU Member States was more significant or comparable to the national passenger car emissions in those Member States. The Shipping Climate Record also approximated that 20% of the EU maritime CO2 was emitted by ships transporting fossil fuels.

What are Seaports doing?

Many individuals, companies and countries around the world have committed to being carbon-neutral. Some seaports have incorporated these incentives by aiming to reduce their greenhouse gas emissions to zero, and then offsetting an equivalent amount of any remaining emissions. Carbon neutrality starts with parting from fossil fuel emissions, accompanied by a phase of energy efficiency and renewable energy and followed by measures to bring down emissions from agriculture and forestry to achieve overall ecological balance.

The Port of Rotterdam (PoR) is Europe’s largest seaport. Owing to that, the port has an excellent location in light of accessibility for sea-going vessels as well as the direct and indirect employment of 385,000 people. However, ships to and from the Netherlands emit more CO2 than all cars in the Netherlands, due to the size of the port and the large amount of ships sailing in and out of the harbour. Where passenger cars emit 16.74 Mt CO2, ships emit 19.91 Mt CO2. To address this concern, PoR has taken many initiatives towards an energy transition. The port aims to meet the Paris Climate Agreement objectives by becoming a carbon neutral port in three steps: 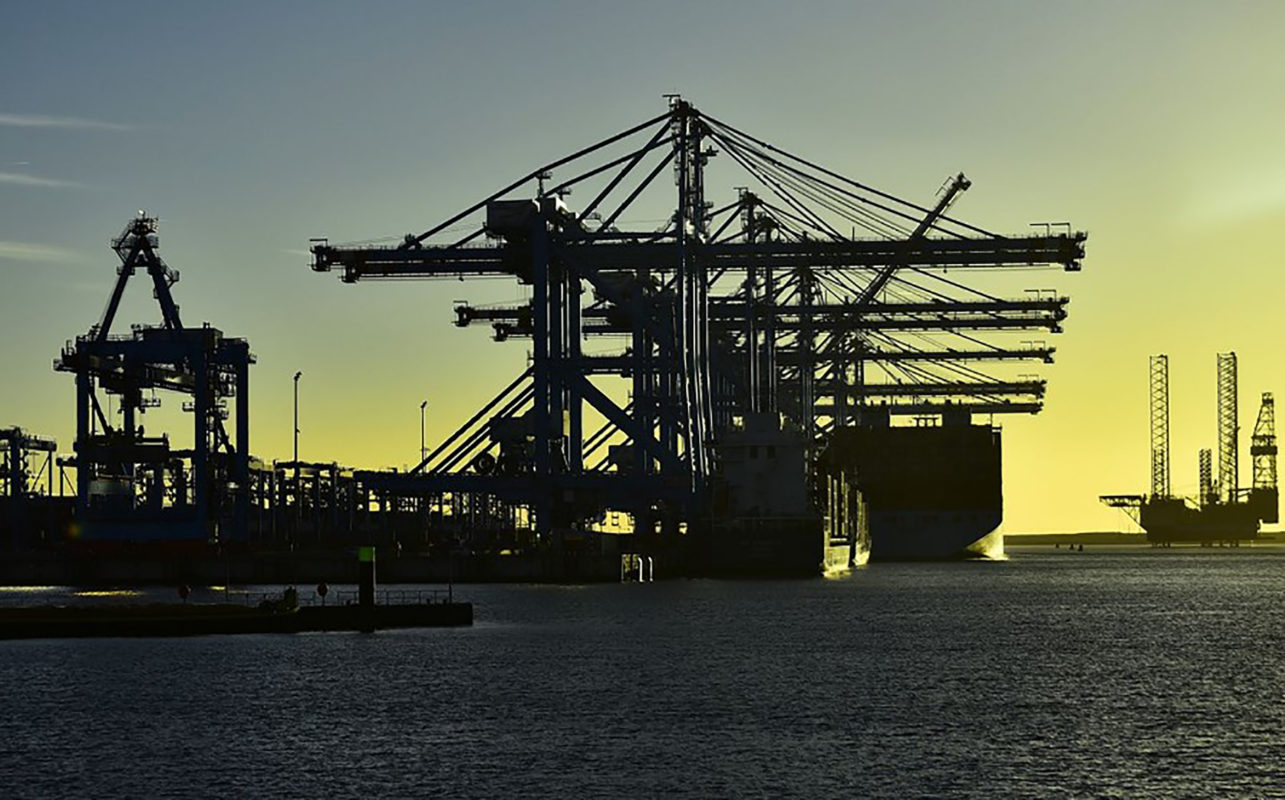 Step 1 entails using residual heat to heat homes, commercial buildings and greenhouses. As well as capturing CO2 and storing it under the North Sea. Step 2 goes about changing the energy system by using electricity and green hydrogen instead of oil and gas for heating. Step 3 is the replacement of raw fossil materials by using biomass, recycled materials, green hydrogen and CO2.

In addition to the energy transition plan, PoR is looking to create sustainable transport, for example by enabling ships to sail more efficiently using digital means, promoting the use of electric motors, electric cranes, and by stimulating transition fuels such as biofuels and LNG. These transition fuels will eventually be replaced by hydrogen and synthetic fuels. A recent development is the ZES – launch. ZES stands for Zero Emission Services, a company that makes inland shipping more sustainable by renting exchangeable battery containers (ZES-Packs) to inland shipping companies. The first ZES charging station will be located in Alphen aan de Rijn, where also the first ship, the Alphenaar, will sail using the ZES-Packs to transport Heineken beer to Moerdijk. The network of charging stations will gradually be expanded to approximately 20 stations, providing national coverage. With two charges ZES-Packs, an inland vessel can sail 50 to 100 km, depending on the current, size and draft of the ship. ZES is expected to sail 150 vessels by 2030.

Another advance towards the PoR energy transition is the development of a green hydrogen plant by Shell. The plant will be located on the Second Maasvlakte under which a pipeline will run to the refinery in Pernis. The Gas Union and the PoR Authorities are looking to construct this pipeline jointly. The plant should be in use as soon as 2023. The PoR is changing their infrastructure to rely on green energy by investing in wind and solar power in the port. They are also opting for more energy-efficient equipment; for instance, the Port Authorities are replacing all public lighting in the port area with more energy-efficient LED lights. Additionally, the port is commissioning hybrid patrol vessels (electric and hydrogen). 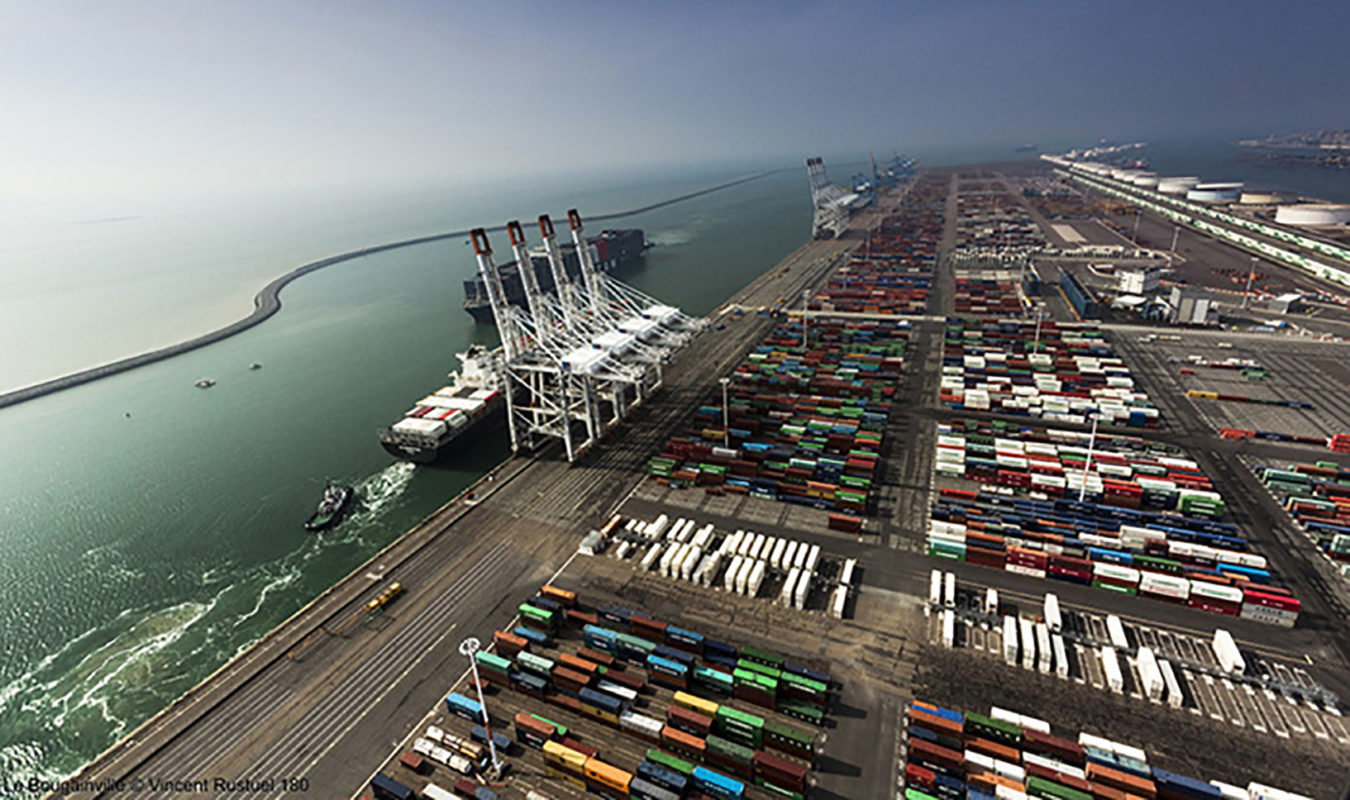 Port du Havre as awarded the title of Best Green Seaport by 18.000 Asian chipping and international trade professionals. The port is committed to the environment and the sustainable development of its activities, with respect to both the territories and the oceans. HAROPA has a Green Port policy with different initiatives and projects including the development of new fuels, electrification of the fleet and the launch of trophies to reward these initiatives. However, ships to and from France emit more CO2 than all cars nationally. Where passenger cars emit 9.6 Mt CO2, ships emit 9.8 Mt CO2.

The Grand Port Maritime du Havre ensures coherent management of its territory while respecting its natural heritage. They take into account their environmental impact and work towards minimising the negative effects of all trade and industrial activities. They also integrate the environmental considerations into each development project and seek to engage in partnerships with local stakeholders on the protection and preservation of the local flora and fauna.

In relation to this years’ theme of World Environment Day, biodiversity, the port has its action plan. The Seine estuary, a natural reserve within the port, represents a vibrant ecosystem with more than 700 plant taxa, 300 bird species and no less than 9 species of amphibians. The port is responsible for the management and preservation of natural areas on its territory and has five lines of action: 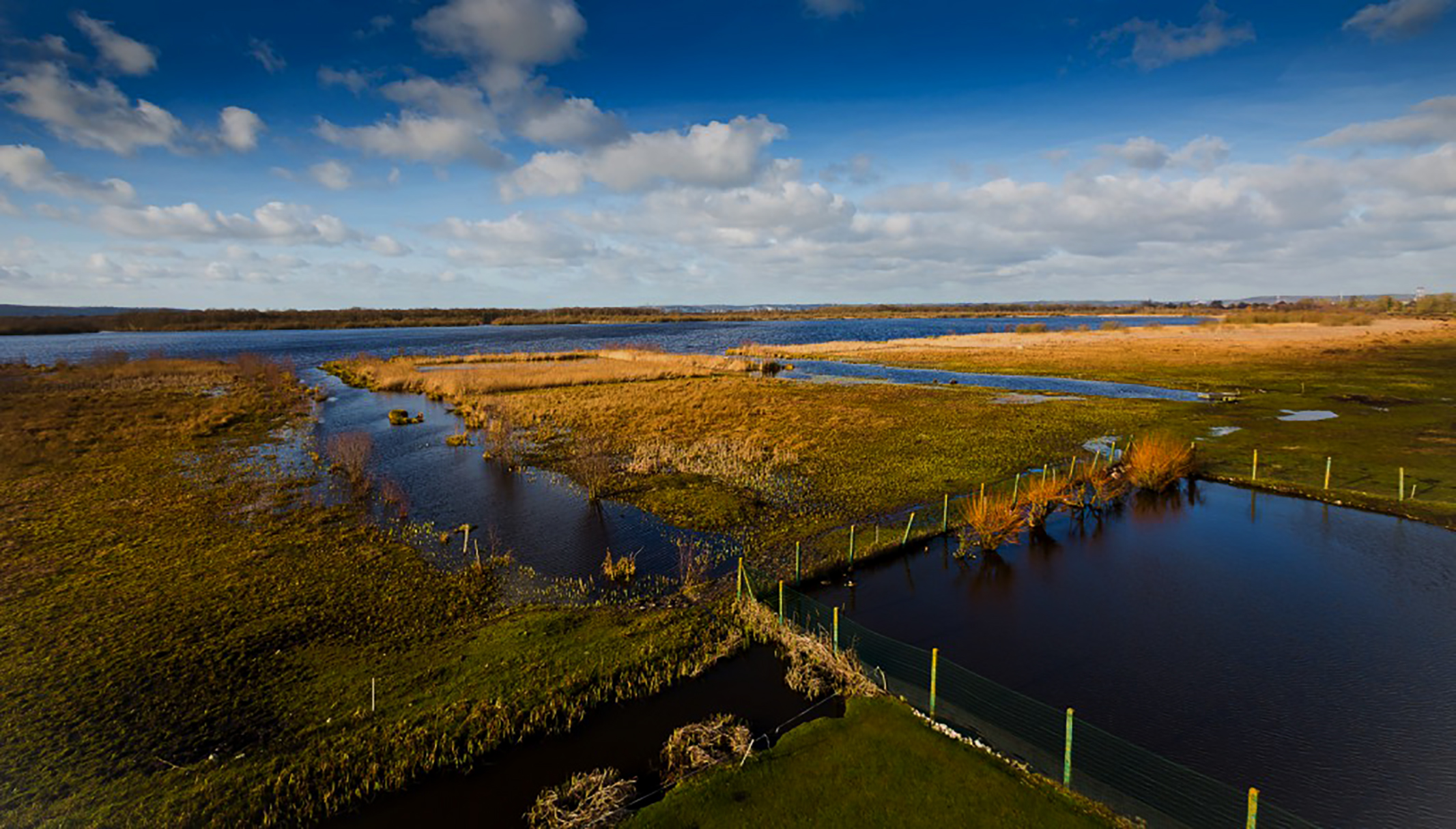 HAROPA moreover sets out to limit waste production and raise awareness among its staff. The port regularly invests in reducing the consumption of raw materials such as the instalment of a “fun” recycling terminal (CANIBAL) with a lottery system to reward the right sorting action. In 2017-2018, 31.218 waste items were collected which is equivalent to a saving of 679 kg of CO2 or 3.236 light bulbs lit for 24-hours. 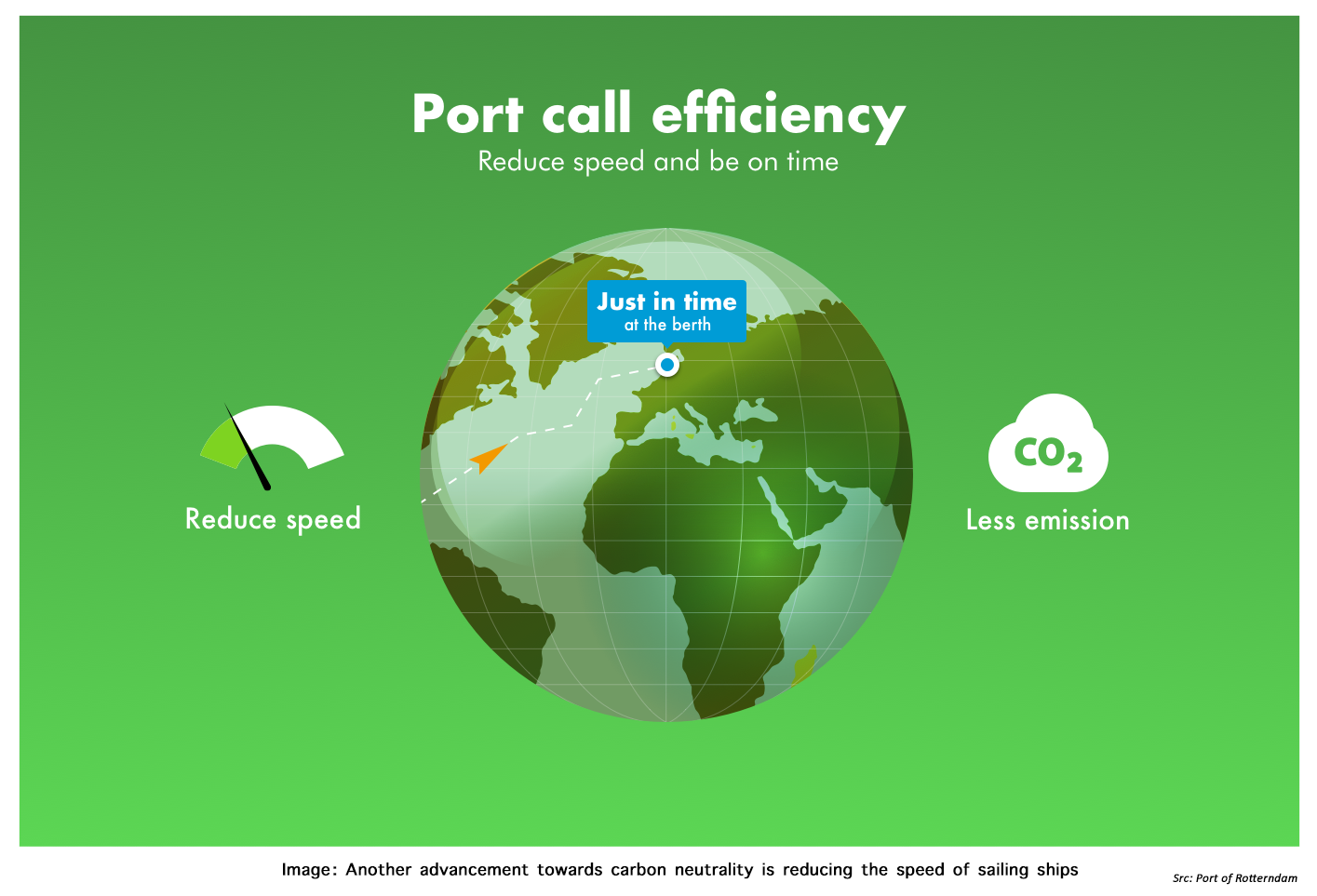 To efficiently reach the goal of carbon neutrality, seaports can undertake several other actions. As proposed in a publication by the International Union for the Conservation of Nature, steps can be taken for short, medium and long-term management of ecological effects. Such as, but not limited to, the restoration of physically damaged habitats, monitor levels of copper and organic biocides, and increase public awareness regarding the issues and effects of maritime traffic.

Seaports contribute significantly towards the rise in CO2 emissions globally. In an effort to address growing concerns about the emissions, seaport management authorities have started working towards improving their climate sustainability. On the other hand, seaports face environmental challenges such as exposed coastal locations, low-lying areas and deltas and the interdependence with trade, shipping and inland transport. As well as the lack of adequate data on institutional arrangements to address regional and local climate effects and the lack of engineering and design standards in light of the changing climate.

The paradigm shift in planning, investment and operation of seaports seems to be a necessity as they are a strategic economic sector at risk. Adaptation of ports requires the development of organisational ability to respond to climate change challenges, involving raising awareness, skill development, data collection and monitoring. Many seaports have started acknowledging the need to become more sustainable and have already taken measures towards becoming environmentally-friendly ports. This movement is picking up pace globally as seaports have started promoting innovative changes towards greener energy, producing less waste, preserving biodiversity, and combatting air pollution. However, for this change in trend to truly materialise, more seaports, organisations operating within the ports and government bodies need to follow suit by supporting and incentivising such initiatives.

“In a globalised trading-system it is in everyone’s interest to ensure the climate resilience of critical transport infrastructure across regions”.

Image 1: Port of Rotterdam: Hyper-Smart Container to Begin Round the World Trip (2020). Available at: https://www.marasinews.com/technology/port-rotterdam-hyper-smart-container-begin-round-world-trip