The Status Quo of People Smuggling in the Port of Rotterdam

Introduction
Thousands upon thousands of vessels pass through the Port of Rotterdam every year[1].  An operation of this size does not come without risk and exploitation. There are numerous examples of news articles highlighting the frequent drug busts that take place within the port. Yet, drugs are not the only illegal ‘items’ being smuggled through the port. Trafficking of human beings also occurs at the Port of Rotterdam. The victims are mostly migrants making the illegal naval crossing to the United Kingdom in hopes of finding a better life. It is safe to say that human trafficking has become an epidemic that is not exclusive to the Port of Rotterdam, yet how does the port fit within the scheme of things?

Despite being two separate offences, human trafficking and migrant or people smuggling often overlap. One of the critical elements to separate smuggling and trafficking is consent. In the case of smuggling, the relationship between the parties is based on a mutual agreement, by which the migrant pays for the service of being transported to a desired final destination. Nevertheless, a situation that begins as smuggling can become trafficking in route or on arrival. Sometimes migrants are transferred to traffickers on the moment they reach the country of destination. Other times, the smugglers themselves coerce migrants into working for them to repay the cost of the travel. In this sense, there is a convergence in the person of the smuggler and trafficker.

‘People smuggling’ typically occurs when there is a group of people or demographic in need of migration passages to a location that is safer or in some way subjectively better than the one they reside in. Organised crime groups facilitate these passages and take advantage of the desperation these people experience. The perpetrators of people smuggling often have little to no regard for the safety and comfort of those being smuggled, which can sometimes have fatal consequences[3]. A relevant example of this are the 39 dead refugees that were encountered in the back of a lorry in Essex, England in October of 2019[4].

People Smuggling Cases in the Port of Rotterdam
Multiple noteworthy cases can shed light on the complicated problem that is people smuggling in the Port of Rotterdam. Recently, on the 2nd of February, the military police with the help of sniffing dogs intercepted 19 Albanians hiding in the back of a lorry. The lorry was trying to make its way to England on a ferry. The 47-year old Romanian driver of the lorry was arrested. The refugees were likely on their way to England in the hope of finding a better life there [6].

18 individuals of Afghan, Indian, Syrian and Pakistani origin were found hiding in the back of a lorry filled with car tires on the 4th of April 2015. They were all hidden in a small hidden makeshift compartment between the tires. The refugees were later discovered after a sniffing dog alerted the military police of their presence and the 58-year old Latvian driver was taken into custody under the suspicion of human trafficking. Like in the last case, these migrants[7]. A similar case occurred on the 16th of June 2019 when the military police found another 18 persons in a lorry carrying car tires. All of them were of Indian descent[8].

On the 6th of October 2019, 21 migrants that are presumed to be Vietnamese were discovered hiding among cargo boxes in the back of a cooling unit on a lorry. This vehicle was also to be transported on a ferry to England. What makes this case very interesting is the uncanny similarities it shares with what happened in Essex recently. In both cases, the refugees were Vietnamese refugees hiding in a cooling unit and both times the drivers were of Irish descent[9]. One may now realise that tragic events that have taken place in Essex could very well have happened at the Port of Rotterdam in this instance. Yet, more importantly, these similarities emphasise the existence of people smuggling syndicates that use the Port of Rotterdam for their practices. 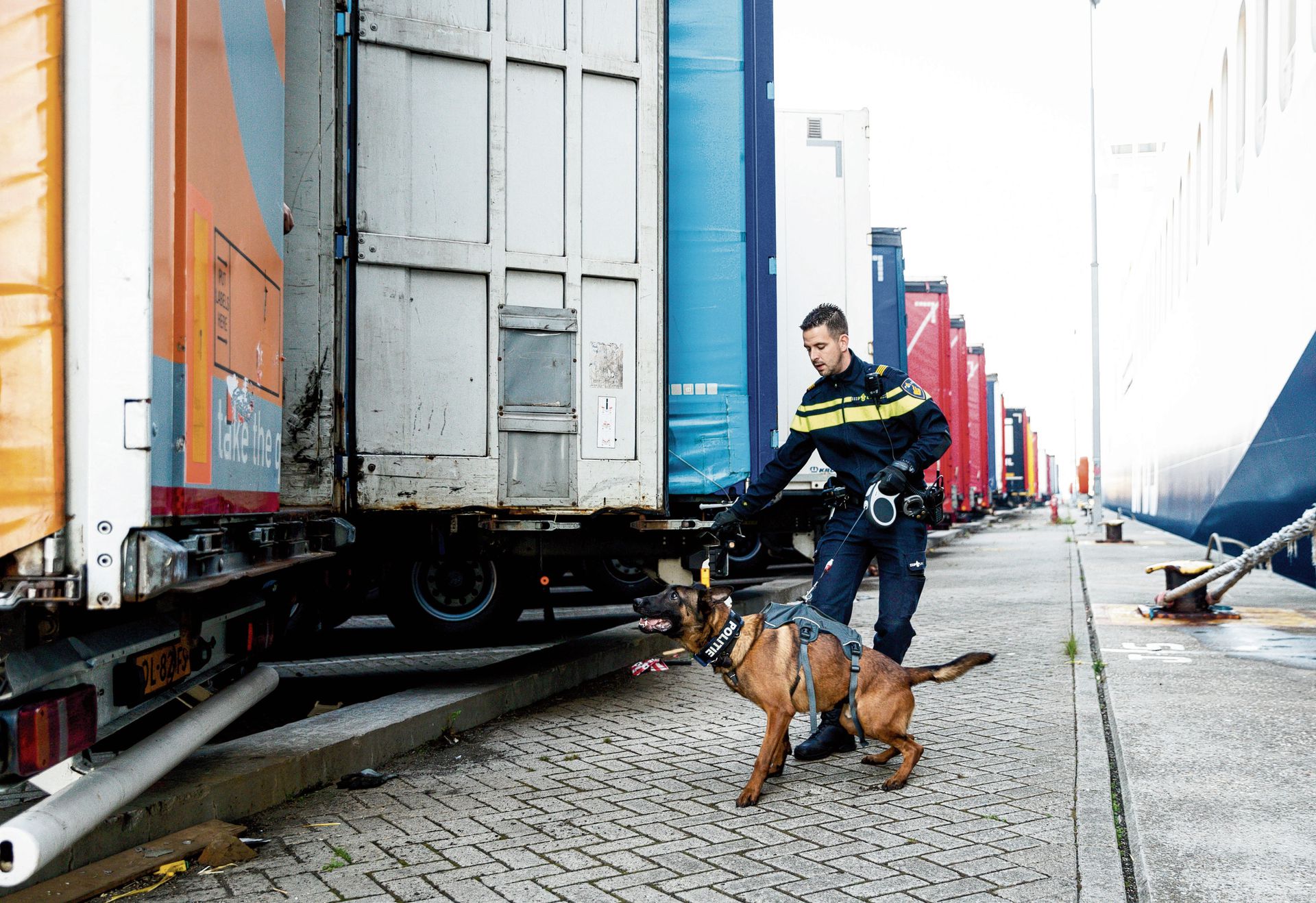 These are few out of many cases that are all very similar. What this tells us is that there is a definite pattern to be found in people smuggling activity in the Port of Rotterdam. This pattern is the hiding of individuals in inhumane conditions to smuggle them to England in the back of a lorry which is transported on a ferry. The similarity of all these cases might make one assume that people smuggling activity is easily intercepted. Yet, it is the volume of lorries that make it challenging to search every vehicle without significantly slowing down the essential systems of the port.

Perpetrators of people smuggling in the Port of Rotterdam
The Dutch Public Prosecution office (Openbaar Ministerie), has acknowledged the existence of human trafficking networks that are active in- and outside of the Port of Rotterdam. These networks can span across multiple countries, which makes it challenging to track down the core of the problem. In January of 2020, the Dutch military police (Marechaussee) arrested multiple persons under the suspicion of people smuggling offences. The French authorities initiated the investigation that led to the arrest of these individuals. During this investigation, multiple Dutch license plates were identified, which indicated the existence of a Dutch branch within the network[10].

Major migrant smuggling networks operate in Eastern Europe. Here migrants hope to find the means of being smuggled into mainland Europe or England, sometimes with fatal consequences. When investigating a crime network spanning across multiple countries, a Joint Investigation Team (JIT) is formed that can investigate in all countries represented within the team. An example of this is the JIT formed in November 2018 where Germany, Romania, the UK and Hungary were represented. The goal of this JIT was to dismantle an international migrant smuggling network that operated within these countries[11]. The problem with using JIT’s to dismantle migrant smuggling networks is that they require the cooperation of all countries involved, which they are not always willing to do, and the need of significant funding in order to be successful.

Preventative measures
The main organisation responsible for the prevention of people smuggling within the port of Rotterdam is Marechaussee. The Marechausee performs vehicle searches and employs sniffing dogs. One might assume that the Dutch customs (Douane), would be involved as well. However, the Douane is only involved in cases concerning goods and not persons[12].

The tool that is used most often by the Marechaussee at the Port of Rotterdam to search vehicles for illegal migrants is sniffing dogs, or K9’s. These K9’s are the most efficient option when it comes to inspecting vehicles. Migrants are often hidden behind thick double walls or in cooling units which are hard to penetrate by scanning devices. A well-trained dog can detect a scent through these walls and is, therefore, more fail proof than any other measure that does not involve searching the entire vehicle manually. The Marechaussee had four training dogs in use as of 2017, with ten more in training at that moment[13].

Despite the K9’s being effective, the ever-growing rate of people smuggling cases does call for innovation in the field of preventative measures. In 2019 the production of a sticker with a heartbeat detector was funded by the Dutch military and the Ministry of Justice and Security[14]. This ‘Sentratag’ is to be attached to lorries or containers and is said to be able to pick up the heartbeat of any persons hiding in the container, making tracing potential illegal migrants easier and quicker[15]. The Sentratag has been tested with positive results but has yet to be put in actual practice. This is potentially due to its 25 euro production cost per sticker and one-time-use nature.

The future of people smuggling in the Port of Rotterdam
The problem of people smuggling is ever-growing. In 2018 the Marechaussee intercepted 860  migrants at the port. In 2019 this number increased to 910. The nature of the problem is also ever-changing. Whereas in the past, it was mostly large groups that were intercepted, it is now more often individual migrants that are found being smuggled, sometimes unknowingly to the driver of the vehicle[16].

It is hard to predict what the future of people smuggling will entail due to its fluctuating nature. One can, therefore, not predict if human trafficking networks will continue to use the Port of Rotterdam as one of their routes as security increases in the future. Nor is it easy to say whether migration flows will continue to go to England now that Brexit has come into effect. One cannot predict the future of people smuggling in the Port of Rotterdam with utmost certainty. Yet, if we follow current trends, it would make sense for the number of illegal migrants travelling to England through the port to increase in the future. 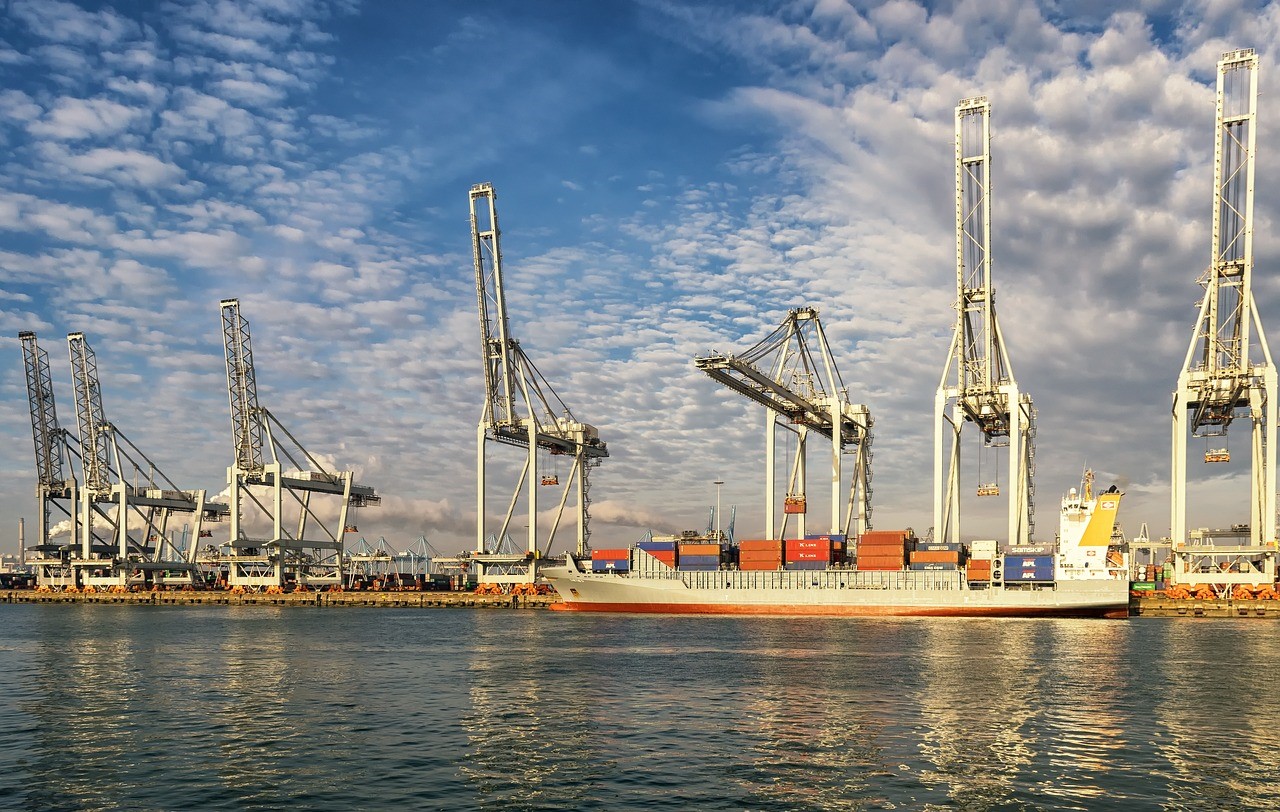 Conclusion
This publication has made an effort to put forward an overview of all human trafficking activity in the Port of Rotterdam. In doing so, it has become clear that there is only one form of human trafficking that occurs within the port, which is ‘people smuggling’. People smuggling is the act of smuggling illegal migrants across borders. This is done with the consent of those being smuggled. However, due to the high levels of desperation among these people, the organised criminals can easily take advantage of those in need of their product. This means that these illegal migrants are often transported in inhumane conditions, this can have fatal consequences seen in Essex in 2019.

It is difficult to track down the core of the people-smuggling networks that operate within the Port of Rotterdam as these networks span across multiple countries. Therefore to adequately investigate these networks cooperation between all involved countries needs to be facilitated in the form if JIT’s, which is often easier said than done.

When it comes to preventing people from smuggling within the Port of Rotterdam, the Dutch Marechaussee is responsible. The Marechausee performs searches and has the authority to make arrests when needed. The preferred measure to prevent people smuggling is the use of K9’s as scanners can sometimes fail to see through double walls or cooling units. A sniffing dog, on the other hand, is usually more successful at detecting illegal migrants hidden in vehicles. Despite the effectiveness of sniffing dogs, there is a need for innovation as the people smuggling problem will seemingly increase in the feature.

[4] Annie Kelly, ‘The 39 people who died in the lorry were victims Why does the law treat them as criminals?’ (The Guardian, 29 October 2019) <https://www.theguardian.com/commentisfree/2019/oct/29/39-people-lorry-victims-law-criminals-immigration-slavery>

Kelly, A. (2019, October 29). The 39 people who died in the lorry were victims. Why does the law treat them as criminals? Retrieved from The Guardian: https://www.theguardian.com/commentisfree/2019/oct/29/39-people-lorry-victims-law-criminals-immigration-slavery